In our latest concert, entitled “Hear the song in the music: Mozart, Schubert, Liszt”, we collaborated with baritone Caleb Woo and pianist Mary Wu in a programme that celebrates the theme of songs and song-inspired piano music and brings together music “pairings” of Mozart, Schubert and Liszt.

Schubert was a major character in the programme – Caleb was our Mr Schubert, singing 3 of the composer’s most definitive and deeply personal lieder.

And so the concert started with the Schubert-Liszt pairing: Liszt was very much inspired by Schubert’s songs and wrote piano transcriptions on over 50 of them many of which are favourites in the pianist’s repertoire today.  Not only did Mary play the role of piano foil to Caleb’s Schubert baritone seamlessly – first on the reflective and wistful Auf dem Wasser zu Singen and then on the darker Gute Nacht (first song of Schubert’s Winterreise cycle) – she then took on the role of Liszt the inspired virtuoso, playing the piano version of Auf dem Wasser zu Singen flawlessly (the Liszt transcription being a highly faithful version of the Schubert song and telescoping both the voice and piano parts into 2 hands).

As Schubert was sent off on his winter journey, The Classical Singers took us to Mozart with Jessie Lau on the organ, singing the famous Ave Verum that has been called Mozart’s perfect composition?  We always enjoy singing this exquisite piece – at a mere 46 bars, it is a summation of the composer’s ability to say something profound in the simplest possible way; it was also one of Mozart’s last works.

We then had the opportunity to share a not-often-performed and rather-unknown piece, Liszt’s A la Chapelle Sixtine, a piano piece that was “doubly”-inspired: Liszt was inside Sistine Chapel and thought of Mozart’s Ave Verum (one of Liszt’s favorite pieces) and furthermore the Mozart himself had first heard Allegri’s Miserere inside the Chapel and as a teenager years ago.  In fact, this piece meant a lot to Liszt who had admired and studied Mozart since a young age and was inspired to write it after visiting the famous religious site in Rome in 1862.  To the audience of today, the work is not known, and a few have asked for the score from us!  Sylvia was glad to be able to bring this piece to life in her first return to the stage as a solo pianist after more than 15 years away.  Indeed, the theme of the piece and the inspiration behind it can be seen from a letter Liszt wrote in late 1862:

It was as if I saw [Mozart] and as if he looked back at me with gentle encouragement.  Allegri was standing by his side, basking in the fame which his Miserere now enjoyed …. I have not only brought them closer together, but, as it were, bound them together.  Man’s wretchedness and anguish moan plaintively in the Miserere; God’s infinite mercy and the fulfilment of prayer answer it and sing in [Mozart’s] Ave Verum.  This concerns the sublimest of mysteries, the one which reveals to us Love triumphant over Evil and Death.” 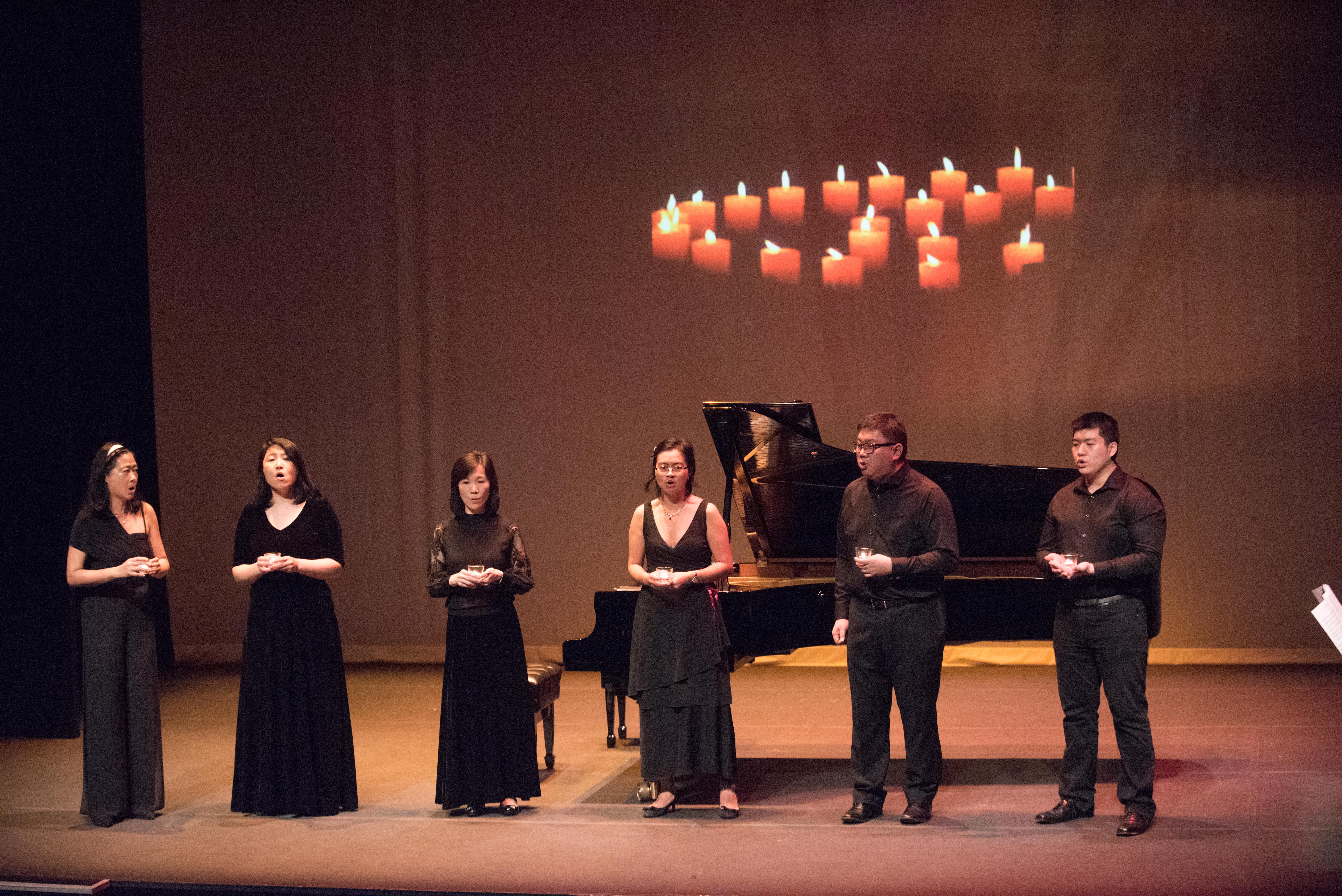 After the intermission (and isn’t it amazing that the Mozart-Liszt pairing involved a choral piece filled with simplicity and its inspiration, a virtuosic piano piece filled with light and darkness?), The Classical Singers brought out candles to celebrate a Liszt-Liszt pairing: first, Liszt’s Ave Maria I (S.20).  Why sing Liszt, one may ask?  Few choirs or ensemble groups seem to sing much Liszt today but we think it is very much worth rediscovering, as we found his vocal music filled with inventive harmonies, beautiful changes in textures, interesting play between the different parts, and wonderful play with words.  Liszt of course is the composer who studied a lot of other composers’ writings, including their vocal writing; he transcribed the songs of Beethoven, Schubert, Schumann, Mendelssohn, Wagner, and many others, including his own!  (He also did piano transcriptions of operatic vocal music, including arias of Mozart, Verdi and others)

We are struck by the sureness of Liszt’s aural imagination and its improvisatory quality.  Perhaps he learned something in transcribing so many composers’ vocal music!  With the harmonies still ringing in our ears, Sylvia, representing “Liszt – heaven and hell”, then sat at the piano to play the piano version of the Ave Maria, a most faithful transcription of the choral piece just heard and subsequently included as the second piece in his 10-piece piano cycle, Harmonies poétiques et religieuses (S.173).  Over the piano score Liszt had written the Latin words of the well-known prayer, while the last 4 notes of the piece starts the next piece that is about God and solitude (the rather more well-known Bénédiction de Dieu dans la solitude).  In these 2 pieces, we see Liszt the famous virtuoso writing religious music that is simple to the point of almost being austere.

The final pairing in the programme is a Schubert-Schubert pairing and both pieces are well-known.  There is the song, Der Wanderer, one of Schubert’s most personal and heartfelt songs – and so our Mr Schubert returns where he left off – and then there is the virtuosic and brilliant piano piece, the Fantasie in C major by Schubert, known as the “Wanderer” Fantasie (not Schubert’s naming of it), written 6 years after the song.  “Ich komme vom Gebirge her …” (I come down from the mountains …), the song starts, in C sharp minor, and moves after a few bars to its relative major, E major, with gravity and unhurried nobility, as the Wanderer sings “Ich wandle still ….” (I wander silently…).  “Ich bin ein Fremdling überall” (I am a stranger everywhere), Caleb goes on to croon, and with a series of shifting harmonies, “das meine Sprache spricht, Oh Land, wo bist du” (That land where they speak my language, Oh land, where are you?), and finally, “Dort, wo du nicht bist, dort ist das Glück.” (There, where you are not, there is your happiness.)

The scene is set for Mary, our “inspired virtuoso”, to find our way out from the depths of the Wanderer!  She brought us right into brilliance and energies of the Fantasie, the work of Schubert the confident master with its many dazzling passages and a stupendously virtuosic conclusion.  It is amazing that such a sunny piece was inspired by and crafts itself around that famously dark and bleak song (there are quotes and clear references to passages in the song, especially in the 2nd “movement”).  Is Mary the devil that Schubert’s refers to (“the devil may play it, for I cannot”)?

At the end of the final piece, we all gathered together for an off-programme finale or encore piece: what can be more suitable than a song like “Bring him home” from “Les Mis”?  Not only does the theme of this song save our Schubertian Wanderer from oblivion, we thought we could do a 4-hand piano fantasy on it too.  And so, not only did The Classical Singers do an a cappella (flash-mob-style) first stanza, Mary and Sylvia then took over and did a fantasy on the middle section of the song (bringing a little bit more of Les Mis – overlaying the theme of “Drink with Me” onto “Bring him home” – and momentarily shifting into the F minor [the tonal minor, à la Schubert] of Schubert’s own 4-hand Fantasie [D.940]) before leaving Caleb to sing the final stanza of the song, with Mary firmly in the driver’s seat on the piano and firmly back in F major.

We are delighted to have presented and shared these songs and song-inspired piano music, and we are excited to have received comments from some saying they are going to look for “pairings” to suggest to us in future!

Pre-concert introduction to the programme is here.

The concert programme booklet that introduces each piece of music is here.